This summer electronic music lovers of West Australia are going to experience something very special. Electric Gardens Festival presents a monster sideshow to kick-start the Australia Day Weekend celebrations with the announcement of ONE SHOW ONLY, UK electro superstar 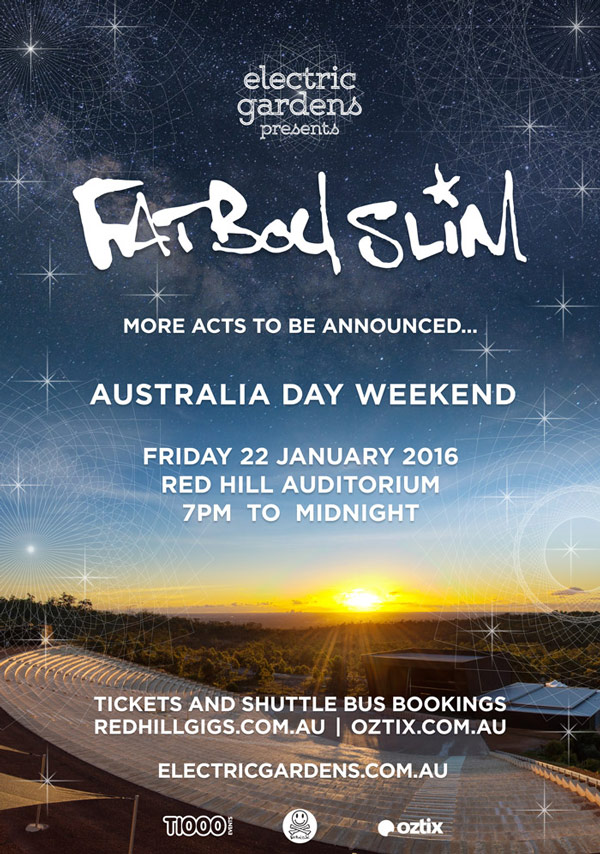 Norman Cook AKA Fatboy Slim is one of the biggest musical influences in the electronic music scene over the last 20 years. He has defined a generation of music lovers. He has headlined festivals globally, and produced numerous iconic dance music albums of the last two decades. He has played a legendary set to 250,000 people at the Big Beach Boutique event in the UK, and created a 2,000 person human smiley at Creamfields 2015. Fans will be reaching for the lasers at Red Hill Auditorium January 22nd 2016.

These days, Cook’s show involves not just playing his own patented brand of ‘party acid house’, but a complex audio-visual production. “I’m technically a video jockey now. We write scripts for all the tunes, make films. In the past, I used to have to literally hold up the next record I was going to play to the guy who does my visuals, and he’d have to find the images to match it. And they were never synched. But now, because of the technology, no matter what speed I play at, even if I just chop quickly into it, the visuals are all synchronized. It’s a show.”

Electric Gardens has chosen the stunning Red Hill Auditorium for this landmark event.
Settled within the John Forrest National Park with sweeping views over the ocean and city, it’s the largest purpose built outdoor concert venue in Western Australia, with a capacity of 5000, this is an intimate mini-festival where everyone sees the show. This Australia Day Weekend will be the pinnacle of the summer with the promise of more acts to be announced.

STAY TUNED FOR FURTHER ARTISTS TO BE ANNOUNCED

TICKETS AND SHUTTLE BUS BOOKINGS ON SALE NOW AND AVAILABLE FROM