Already boasting the créme de la créme of electronic music worldwide, there is no denying that with the addition of NIC FANCIULLI, Aussie favourites PACHANGA BOYS, and Blackflag label owner, STACEY PULLEN, ELECTRIC GARDENS in Sydney’s Centennial Park on Saturday January 23rd, 2016 is going to be one hell of a party! 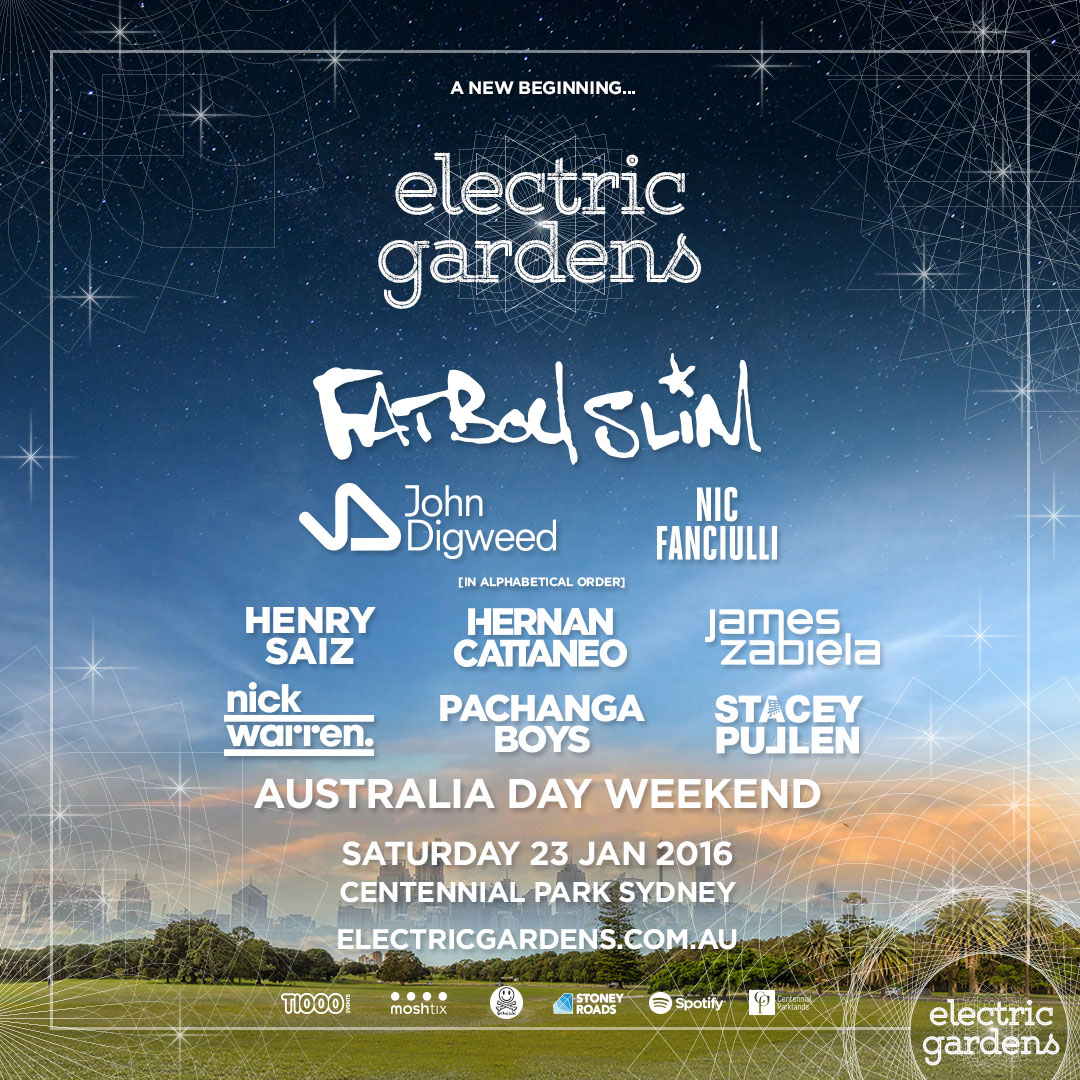 One of the UK’s finest exports in electronic music throughout the last decade, DJ, producer and label owner NIC FANCIULLI, remains one of the last DJs to break through to international acclaim on the strength of his DJ’ing alone, which is no easy achievement in this modern climate. Having just wrapped the season at Space, playing some epic back to back sets with Carl Cox and renowned for his work with artists as diverse as Underworld, Kylie Minogue, U.N.K.L.E, Loco Dice, Josh Wink, Hot Natured, and Tracey Thorn, Nic as a DJ, Producer and label owner (Saved Records), remain proudly at the forefront of electronic music today. Save Records, an important purveyor of international, underground house and techno, Saved has become a global brand, renowned for cutting-edge releases and standout events around the globe.

Rounding out the list of international heavyweights is none other than local favourites, PACHANGA BOYS! Their names are Superpitcher and Rebolledo and together they are trying to make the world a better place with their Hippie Dance. The Pachanga started with underground hits such as “Power” and “Fiesta Forever” on Kompakt’s annual Total compilations, but steadily the good news spread far and wide, and the Pachanga Boys’ DJ sets became one of the hottest tickets on the European music scene and all over the world, including a legendary set for Robot Heart at Burning Man. Soon the boys launched their label, Hippie Dance, home to instant classics like “Black Naga” and the enormous crossover 15 minute hypnotic smash, “Time” which came in at No. 5 on the RA Top 50 tracks of 2012. It’s here they also dropped the album “We Are Really Sorry” and a collection of weird and wonderful collaborations, short films and other exploits. They are Aussie favourites and we are always prepared to move heaven and earth for their arrival!

And if that’s not enough already to leave EDM fans panting in anticipation, one of the industry’s leading talents to emerge onto the scene over the last decade, STACEY PULLEN, will be turning up the heat with one of his legendary blistering sets that have seem the Blackflag label owner playing the world’s hottest parties and international conferences including Miami Winter Music Conference, Mexico’s BPM Festival, alongside infamous nightclubs like Watergate in Berlin or tearing up the decks at Ibiza’s Sankey’s or appearing at Amnesia in Ibiza alongside tech heavyweight Marco Carola at ‘Music On’ – his calendar makes the world a musical playground.

ELECTRIC GARDENS will premier in the lush surrounds of the city’s famous subtropical Centennial Parklands. It will be a showcase of the biggest international names in dance music on Australia’s most iconic date, with exclusive extended DJ sets from a line up of global stars.

STAY TUNED FOR FURTHER ARTISTS TO BE ANNOUNCED